Last week, I watched an amazing film To all the boys I've loved before. It's a romantic film, about a girl who wrote a letter for every boy she liked, but she always kept the letters for herself.

I really liked it, because I like romantic films that are based in real life, The actors were talented and the songs were serene. The actors didn't wear special costumes, because it wasn't a science fiction movie.
The only bad thing about the film was that it's only available on Netflix, so you have to pay 10 per month if you want to watch it. So you can't watch it unless you have Netflix.
On the whole, it was an excellent film that everyone would be interested in, even teenage boys. I would absolutelly recommend this film to everyone. Trust me, you won't be disappointed.
Here's the link for the trailer:  https://www.youtube.com/watch?v=555oiY9RWM4 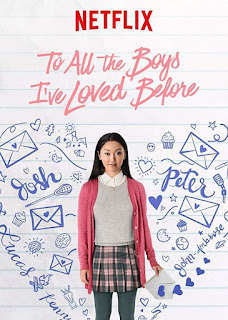