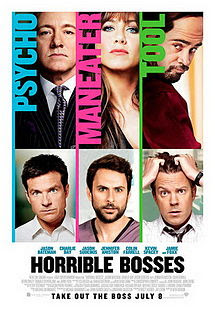 The last film I saw in the cinema was called ''Horrible bosses''. I know it sounds boring ,but it's a comedy that you shouldn't miss.In this comedy there are three friends that their bosses are really annoying and rude to them .So they decided to kill them ,but sometimes many things just not go well .Of course I'm not going to tell you the end . I saw this film and I couldn't stop laughing .It's a fantastic film and I can confirm that!
Posted by mike kat