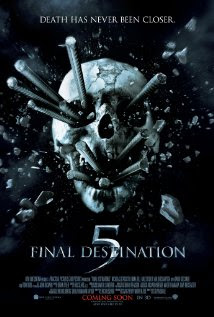 One week ago I went to the cinema with my friends Aliki,Tony and Xrisanthi. We saw the movie "FINAL DESTINATION 5". This movie is a horror film. It was amazing!

The director of the film is Steven Quale. The writers of the film are Eric Heisserer and Jeffrey Reddick. The main actors of the film are Nicholas D'Agosto, Emma Bell and Arlen Escarpeta. In this film a man in a bus has a dream about a bridge which is destroyed and all his friends die. After a few minutes the dream is real. All the things he has seen in his dream become real. So he tells his friend before the bridge is destroyed to get out of the bus and go away from the bridge. They listen to him, so they are safe now. After that event, they don't feel so good. Suddenly, one by one start to die!
Posted by konstantinos bark