A few months ago, an idea was born: D' Class students were all going to collaborate to write down a story involving mystery, romance and suspense, on this special notebook we used in turns. 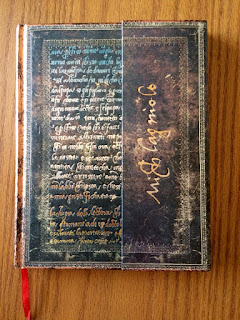 The story was based on the following rules, facts and characters we all agreed on: 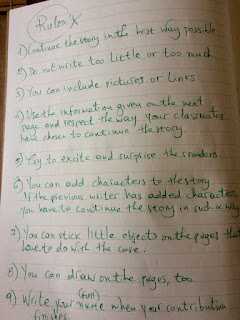 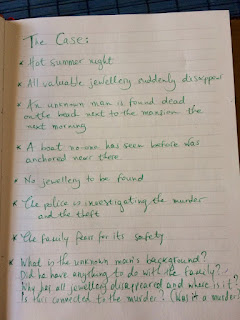 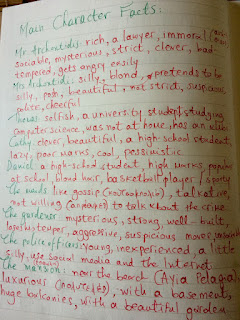 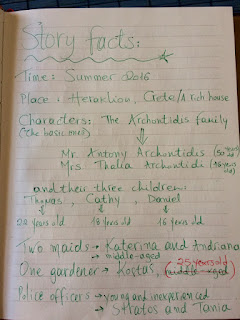 The story we came up with, which was then analysed and depicted, using the usual plot diagram: exposition, rising action, climax, falling action, resolution. Here are some of the students during the creative process.

One hot summer night in Archontidis' mansion two horrible crimes took place when the family wasn’t at the house. The only people that were in the house where two maids who were gossiping in the kitchen and the gardener who was in the garden taking care of the plants at the time of their crime. The first and most important crime was about the discovery of an unknown dead man on the beach next to the mansion. Also an anchored boat was found near the beach too. The second crime was that all the valuable jewellery in the house suddenly disappeared. After that, the family got home and realised what had happened. They called the police and two young inexperienced detectives came to investigate what had happened at the mansion. With a first look, the case seemed to be very complicated and very hard to be cracked by the two young detectives. However, after one hour of hard investigation they discovered footprints in and out of the house. Mostly in the garden. Also they found that the dead man was murdered, shot on the chest three times. In the boat there were signs of fight. After the interrogation of the family they found out that the man was involved with the family and that the jewellery cost more than 100,000 euros. However, the detectives could’t find more evidence about the crimes. The Archontidis’ family was scared for the their lives. The next morning Mr. Archontidis found in his personal things a threatening letter that said: We killed him, we stole the jewellery, you will pay for what you did to us and the next person that will die will be you! But he didn’t show it to the police… 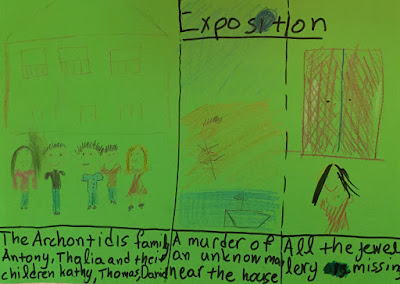 Mr. Archontidis was scared for his life and for his family’s life. At midnight he went to sleep but he couldn’t because of the strange sounds he heard. So he got up to see what was happening. He went to the living room and he saw his youngest son Daniel watching a basketball match. He asked him if he had heard anything suspicious but his answer was negative. Then immediately he went into their big kitchen to drink a glass of water. The moment he saw a knife covered in blood, he was shocked. He screamed and the family was in panic. The only suspicious man was the gardener. The family decided not to call the police because they feared that the culprits would hurt their children. The following day Mrs Archontidi found another threatening letter which was stuck on the door and said: if you contact with the police, your family and especially your children will be in trouble!! Mrs Archontidi examined the letter to see if she could find any fingerprints, but unfortunately the man was wearing gloves. Day by day the case became more complicated. While Cathy was going to school, she observed that two masked men were following her. After that, she started walking faster in order to see what they were going to do. Fortunately,when she arrived to school they went away. Finally, when the family finished their jobs they made a decision. They decided not to tell anything to the police because the two threatening letters mentioned their children. They would never risk anything for them. After a few hours when their children went to bed, Mr and Mrs Archontidi went to the backyard to talk about the scary letters. After a walk someone started to follow them and they had to run. A moment later, Mr Archontidis turned his head and he saw a small piece of paper on the street. He lifted it and showed it to his wife. The letter said “ I am watching you. You can’t hide from me!” They screamed and they started running. The next morning Mr Archontidis went down the big stairs to go to the basement of the mansion. He opened the door slowly and he met the one of the two maids, Adrianna. He told her all the events that had happened and Adrianna behaved very strangely. She behaved like she knew exactly what had happened but Mr Archontidis didn’t pay attention. At night Cathy went for a walk with her little brother Daniel. They sat on a big rock and a few minutes later they heard a loud howl. After that, the two children went to the mansion and said to their parents what they heard. The following day, Mrs Archontidi couldn't stand it anymore,so she called the police. Two policemen arrived to the strange mansion and Mrs Archontidi explained what had happened with her children. 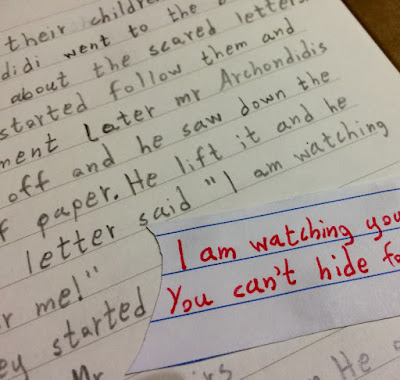 After the parents explained to the police officers what had happened, they interrogated all the family members, who told them everything they knew. Only Adrianna told them that she knew nothing. The police officers thought that Adrianna knew something, but she didn’t want to tell them. However, they didn’t tell anything to Adriana and they suggested to Mrs Archontidi to move in to another place until they found the guilty person. The other day while Thomas was talking with his friend Nick, someone told him that he had to go out of the school for a little because someone wanted to talk to him. Suddenly two masked men caught him and hit him to his face and took him with them. The moment the family realised that something was going on, they phoned the police, but no one answered the phone call. So they decided to investigate the crime on their own. They tried to find Thomas but they couldn't find him. They asked his friends, but no one knew where Thomas was. Just then, Mrs Archontidi found another letter which said “I will kill your son, if you don’t give me 1.000.000 euros.” Mrs Archontidi started crying and called the police again. When the police arrived, the two police officers were scared because they were inexperienced and this crime was very difficult to solve. However they tried to keep calm and continued searching to find Thomas. The next day, the Archontidis family moved to another house and no one knew there they went for their safety. The police officers thought that Andriana was the guilty person because she behaved very strangely, but they didn’t have any clues or evidence that Adrianna was the murderer. 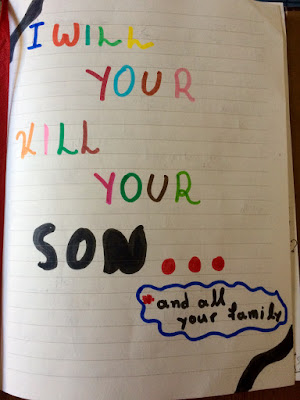 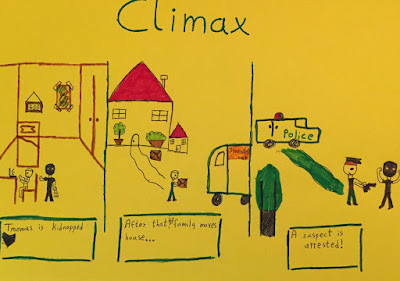 The police was trying very hard to solve the crime, but something was wrong. When the Archontidis family moved to another house, someone was there with them. Maybe a spy or the murderer. Every day the family was trying to calm down and to continue their life like before. But the murderer was always watching them. Every minute, every hour, every day. After a week the family had to go on a trip. They left Cathy and Daniel two policemen outside and they left for their trip. The kids were watching TV and playing with their phones when they listened to a very strange noise. They were scared very much and they hid under the table. When the noise stopped, Daniel went to see what the strange noise was. He told Cathy to wait there for a moment. When Daniel came back he Saw Cathy almost dead. She was breathing but she was injured very badly. He called the police and they arrived there five minutes later. Cathy was very injured and she went to the nearest hospital. The police phoned to the family and they arrived there as quick as they could. The kid was fine and the police searched and investigated all the house and they stayed there to investigate for many days. The police had almost solved the case because they had found too many clues which where necessary. The Archontidis family was very scared, but the one thing they had to do was to wait for the police to solve the case. The other day the murderer tried to strike again, but suddenly a policeman saw him and he said “put the gun down” and he arrested him. 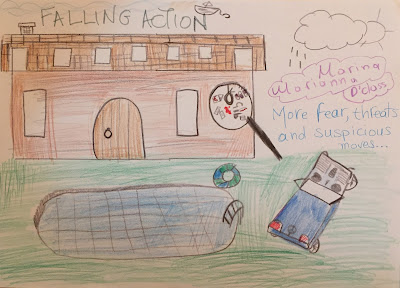 After the arrest the suspect went to the police station with Stratos. When they arrived they took off the mask. Under the mask, Kostas the gardener was hiding. They told him that if he said the truth, he would spend less time in prison. She said that he had done nothing but the policemen didn’t believe him. The next morning Cathy arrived at the police station with clues that proved that Kostas was innocent. Cathy started narrating the story:

'Two nights ago while I was at Kostas’s house, someone threw a rock at the window. It had a note on it. It said, “Go to Archontidis' house at 7 o' clock with a mask on your face and kill Mr Archontidis. If you don’t do that, we will kill your girlfriend Cathy.” Kostas was in a dilemma. At the end of the day he decided to do what the note said.'

'So is it Archontidis who did the other crimes?' asked Stratos, the inexperienced policeman. Cathy answered “ Mr Stratos, let me finish. I took the note and I noticed it had a well known smell. I left from Kostas’s house and I arrived at my house. And that smell was again at my house. I was wondering whose perfume it was when I understood that that perfume was my mother’s. The next day I followed her. She was going to my dad's biggest enemy, Mr Papadopoulos who was very rich and always loved my mum, but hated the rest of the family. They had a little conversation.

T: Did you give the message to Kostas?
P:Yes, tonight he will be arrested by the police to save us.
T: The poor boy, he will have the same end with that boy who we saw on the beach and who we killed so as he doesn't tell anyone.
P:Exactly! Have you hidden the jewellery well? We needed to make it look like a robbery.
T: Yes, my dear. You have been telling me everyday since that day.

Then my phone rang and they understood that I heard everything. They caught me and held me in a room. My brother Thomas, who had been kidnapped because he had caught Mr Papadopoulos and our mother red handed hiding the jewellery in a secret hideout, was kept in the same room. I freed him and allowed him to tell me the whole story.A little later, I escaped and I came here to tell you the truth. Here is a recorder. I have recorded all the conversation.”

"Thank you Mrs Archontidi. Give us the clues tomorrow morning and Kostas will be free. And Mr Papadopoulos will be in prison. You can leave now”, Stratos said.

The end all students co-authored

The next day Mr Papadopoulos and Thalia Archontidi were arrested and all the adventure was over. Thomas, Cathy and Daniel then had to accept that their own mother had completely lost herself and betrayed the whole family in the name of wealth and arrogance. Coming to grips with the facts, the rest of the family had to continue life and try to be happy beyond money and unnecessary luxury. 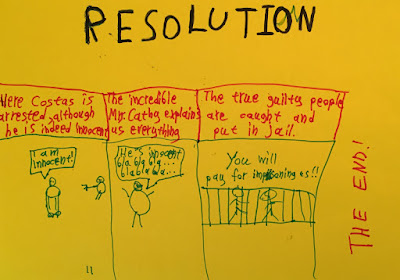