Imagine Dragons are a pop band from Las Vegas consistin of the lead singer, Dan Reynolds, the guitarist, Wayne Sermon, the bassist, Ben McKee and the drummer, Daniel Platzman. However, the true meaning behind the band's name is a secret. The group says that Imagine Dragons is actually an anagram made up of the letters of different words, but they won't tell what the original words are!

Imagine dragons have won 3 American Music Awards, 9 Billboard Music Awards, 1 Grammy Award and 1 World Music Award. And they have been together as a band since 2008 until now and they're getting better and better.
They have written too many songs, but some of them are most famous than the others. Like; Believer, Thunder, Demons, Radioactive and On the top of the world. Their first song is It's time.
So if you don't know them don't lose your time! In my next post I'm going to put videos of them! 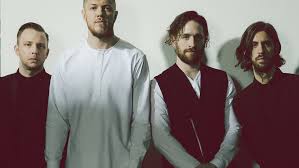